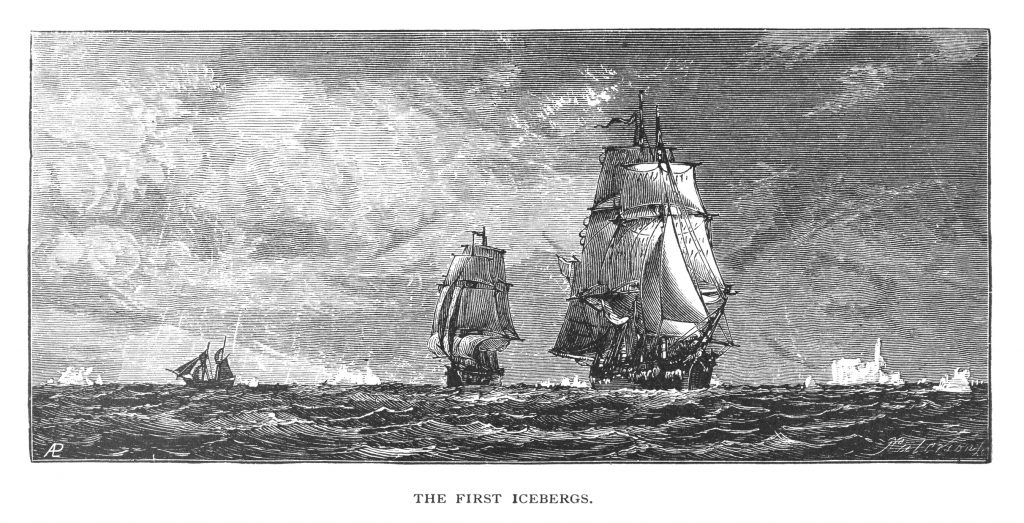 An idea with many stations. Myth, reality or just nonsense?Despite illustrious procedures – importance and sense are given.

Harvesting drinking water from icebergs reads like an idea straight out of a science fiction novel: a modern and unreal adventure in harnessing a previously unused and untapped water resource. At first glance, the idea seems so special today that everyone involved in the project initially thought they were alone – the first to think of something like this, an Edison of drinking water. But if we look far back, we have to realize that the idea of extracting water from ice is more than 250 years old. While in the past it was primarily about securing water on long ship passages or about cooling goods, today it is increasingly about obtaining drinking water to counter the water shortage.

When we started thinking about it in 2010, we actually believed that we were the first to come up with such an alternative to drinking water. However, we quickly realised that the idea had been in front of us and that it was older than some people might think today.

The fact that no project has been realised so far depended and still depends on many factors. There are various reasons for this. Some did not get beyond the idea, others only had the technological possibilities of their time at their disposal. Some, on the other hand, did not have sufficient financial resources.

In our case, we have been self-financing for ten years. A situation that has not necessarily contributed to rapid development. We are of the opinion that anyone who has understood the problem and developed a solution must focus on the goal of realising it and also be willing to invest themselves. Only then can we motivate people to continue writing history with us.

Today we look in the rearview mirror of history. In a chronological overview, we put together the previously known milestones in the history of water taken from ice.

No. 1 – An iceberg becomes a source of drinking water for the first time

In the 18th century, Captain James Cook set out on an expedition to the South Pacific. While crossing the Antarctic Circle, he took on board around 25 tons of ice from icebergs to replenish his water supplies. After him, many seafarers used iceberg water to survive. The passages often took months and the water supplies, which could hardly be planned with precision, dried up or went bad. James Cook is therefore historically the first in the series of people who saw icebergs as a source of drinking water and also used them.

No. 2 – The first professional transport of ice

In 1806, Frederic Tudor “The Ice King” shipped 130 tons of ice from Boston to the Caribbean island of Martinique. Around 1823, the ambitious businessman sent a test shipment to Calcutta. After successful transportation, he expanded the long-distance trade in ice to Rio De Janeiro, Indonesia, China, the Philippines, Australia and Peru. We include Frederic Tudor in the list because he started the commercial transportation of ice.

No. 3 – The first transport of glacial ice

In the winter of 1853-1854, a ship brought glacial ice from Alaska to San Francisco. It is not known who did this, for what reason this was carried out or how much ice was involved. However, since there were no modern refrigerators at that time, ice had a very high value with its capacity to cool goods. During this time, many entrepreneurs began to emulate Frederic Tudor (No 1) and opened up more and more ways to produce ice. While Frederic Tudor was still using ice from lakes and glaciers, the idea of extracting ice from regions where it was available all year round slowly developed.

No. 4 – The first idea of towing an iceberg

It’s not the story from ‘Around the World in 80 Days’, but it could still fit in the timing. It is believed that around 1863 an American entrepreneur had the idea of towing icebergs to India using a steam-powered ship. Whether the story is really true and why India was the target of the idea can unfortunately no longer be deciphered due to a lack of clear facts. It fits the time and the people who wanted to turn the world upside down. According to this, it was an American who, 158 years ago, first came up with the idea of towing an entire iceberg to obtain drinking water.

No. 5 – Iceberg Towing to Callao

In the 1890s and 1900s, smaller icebergs were brought from Chile’s San Rafael Lagoon to Callao, Peru, 3,900 km away. Since the transports also took place before the era of the refrigerator, we assume that the ice was needed and used to cool goods.

No. 6 – First idea to use Antarctic icebergs

In 1949, US oceanographer John Isaacs proposed towing Antarctic icebergs and transporting them to California. John Isaac of the Scripps Institution in La Jolla, California, showed in a scientific seminar that it would take a fleet of six ocean-going tugs about half a year to tow a 30 km long iceberg to California from the 65th parallel south. Since then, this idea has inspired technical fantasies.

No. 7 – Icebergs to be used against drought for the first time

In 1969, Wilford Weeks, a glaciologist at the US Army Regions Research and Engineering Laboratory in New Hampshire, discussed the possibility of attracting floating icebergs to the coasts of arid regions before peers from around the world. He divided the problems into four sub-areas: locating the icebergs, calculating the energy expenditure, meltwater loss and economic feasibility. Wilford actually thought the idea was nonsense himself. Therefore, he wanted to clear up the myth once and for all and started a study that was to finally refute all consideration it.

However, the study he conducted with his colleague William Campbell of the US Geological Survey’s Ice Dynamics Projects came to a different conclusion. The idea of transporting icebergs is technically and economically sound. However, pulling icebergs only to dry areas would require too much effort. At the time, the plan was to tow icebergs measuring 3 x 1.5 km. The dimension of the idea overshot the target. Another study showed that such a project requires a lot of “money” and “thirst”.

No. 8 – Use of icebergs in the desert states of the Emirates

The most well-known figures in extracting drinking water from icebergs are the Saudi Prince Mohammed Al-Faisal and the French scientist Georg Mougin. In 1977, Prince Al-Faisal founded Iceberg Transportation Company International Ltd with George Mougin. They pursued the idea of towing icebergs across the equator. Financially, their project was very well equipped. Based on the amount of money available, this was probably the most financially strong project to date. Nevertheless, the project was never realised in any meaningful way. Crossing the equator to Bab el-Mandeb was, among other things, too demanding and exceeded the possibilities of real implementation. Prince Mohammed Al-Faisal was the founder of the international research group ‘Iceberg for the Future’.

No. 9 – Marketing of premium water and irrigation of fields

In 1999, a project from Germany developed the plan to obtain drinking water from ice for the first time. Icetrack AG had the goal of towing icebergs from the Antarctic towards South Africa and cooperated with the AWI (Alfred-Wegener-Institut). The focus of the business model was the sale of premium water. The project was discontinued.

No. 10 – Iceberg water for use against global water scarcity

In 2010 we started with the first considerations of extracting drinking water from icebergs. In the beginning we only looked at the water as well as how and for what it can be used. We were excited about the opportunity to harness an inexhaustible resource and set up a project that combines societal and economic concerns. It was clear to us: a project like this can only be successful and sustainable if it is socially beneficial, environmentally friendly, economically strong and takes a strict industrial production approach.

We realised that it is not the transport that causes the difficulties, but rather the storage of several million to billions of litres of water. So we initially focused on the anchoring of icebergs, the extraction of water, CO₂-neutral storage, distribution to people and the automation of optimal routings. Maximum efficiency saves energy. The company POLEWATER was founded in Berlin in 2014.

No. 11 – An iceberg transport is technologically feasible

In 2011, the French company Dassault Systèms, in cooperation with the well-known French iceberg researcher George Mougin (No 7), presented the ‘Ice Dream’ project. Dassault Systèmes is a multinational software development company and developer of the 3D Experience platform – software that can be used to calculate technically complex projects and visualise them in 3D. Under the project name Ice Dream, the developers wanted to find out whether iceberg transport is fundamentally possible based on the current state of technology. The results were impressive and showed a indication that realisation was possible.

No. 12 – Iceberg water to transform the desert states of the Emirates into green oases

In 2015, Abdullah Al-Shehi, an Abu Dhabi-based car wash entrepreneur, presented his vision of drinking water taken from ice. A mega iceberg with a dimension of approx. 40 million tons is to be towed from the Antarctic region across the equator to the Emirates. The aim is to supply the Emirates with drinking water and to transform the desert state into a green oasis. A specially published promotional video shows the mega tabular iceberg in the scorching heat off the Emirati coast, complete with polar bears and penguins as attractions. Side note: Polar bears live north of the Arctic Circle, penguins live in the Antarctic Circle.

No. 13 – Iceberg water for South Africa

In 2018, Nick Sloane launched a communication offensive and presented his project for extracting drinking water from icebergs. The South African, a well-known salvage expert who raised the sunken Costa Concordia with his company, wants to use it to solve Africa’s water problems. The project envisages storing the water in large tankers. In addition, it is planned to have the icebergs run aground after the towing process. According to current information, the capital requirement is in the three-digit million range and would be financed by the South African state. So far, the government has not acknowledged this.

During the last 250 years there have been many figures who, long before all of us, pursued the extraction of water from ice or icebergs – partly out of personal necessity, partly on the basis of professional planning. Perhaps today’s actors will unravel the mystery and set sail with an iceberg in tow. Perhaps implementation still lies off in the future.

If we look at the current players and pioneers, analogies can be found in the implementation, since physics and natural sciences set the pace at many points in project implementation. Nevertheless, there are different technological and conceptual approaches.

The world has changed a lot since the original idea. It is not just the lack of water that has taken on drastic forms and is increasingly presenting a threat to many regions of the world, environmental disasters in the course of climate change are also pushing us more than ever to put every technological project, no matter how effective, to the environmental test. That’s why we can no longer look at solution approaches in isolation and ignore everything in order to implement solely the solution. The danger that we will end up solving a problem to some extent while making another even greater in the process is too great. 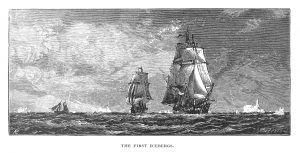 An idea with many stations. Myth, reality or just nonsense?Despite illustrious procedures – importance and sense are given. Harvesting drinking water from icebergs reads like 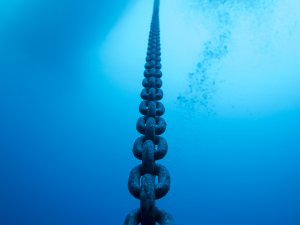 For the secure anchoring of an iceberg, we rely on technologies and materials that have been tried and tested over many years. We are guided

Receive all the News about POLEWATER.